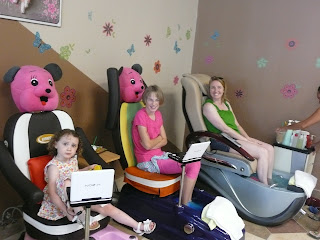 This is our new favorite hangout in Olympia - Spoil Me Nails! They have these adorable kid chairs with DVD players. It's never been so convenient to get my nails done. Aubrey is turning into a little diva - she is very particular about what kind of designs she wants on her nails. This last time she got rhinestones. What have I done? 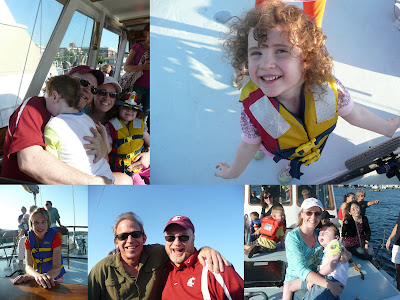 During all this beautiful weather we have been having, we had the opportunity to go on a sailing trip through the Starlight Foundation. It enables families with seriously ill children or kids with chronic conditions to participate in special fun events. Unfortunately, Aidan didn't have a very good time, but we all did our best to enjoy ourselves. It was a gorgeous evening and we had some great friends with us. Aubrey got to steer the boat and had a wonderful time with her friend, Melissa. 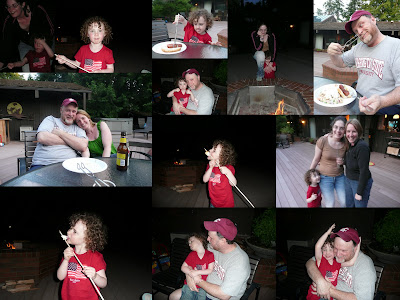 We had a wonderful 4th of July celebration. Janna was with us and we had a great BBQ dinner, blew off fireworks, had a dance exhibition, and to top if all off Aubrey roasted marshmallows for the first time. She loved helping Daddy build the bonfire and Janna was a big help with the roasting. Aubrey didn't really like smores (crazy girl), but she loved the marshmallows. Aidan slept through the whole thing. We were glad to spend it close to home, low-key, but lots of fun!

It's official...we have sent off our application and we're starting the paper work. It's crazy how much there is to do and overwhelming, especially when you already have a pretty full life. But when God calls... we have chosen to answer...Yes!

Several years ago I heard a speaker, named Lysa Terkeurst at a MOPS Convention. Her talk on Saying Yes to God made a huge impact on me and I bought the CD. Of course after I got home I promptly misplaced the CD and never listened to it again.

Last fall I was driving home late at night and was listening to the radio. Focus on the Family was on and they were playing a talk that I quickly recognized as Lysa, the same woman I had heard several years before. This time she was speaking about how God led her family into adopting two boys from Liberia that they had seen while watching a performing Liberian Boy's Choir. It was an amazing message and moved me to tears. That night I posted on my facebook that my girlfriend's should listen to it on-line. One of my friends wrote me back and said that she had listened to it and it really impacted her too. We shared how we desired to be women who listened to hear God's plan for our lives. Later she wrote me and said that an African children's choir was coming to our church this May, and maybe God was doing something here. It struck me as kind of funny for her to say that, but it somehow resonated within me and I tucked it away in my heart.

A couple weeks previous to this, Bruce made a funny comment to me one night about how he would like to have another baby with me. This was crazy talk that he blurted out in a moment of openness as we had already decided we were 99% sure we were done having babies. I immediately told him he was crazy and dismissed him. But as I lay in bed moments later, the thought came to my mind..."If we have any more kids, it will be because we adopted. I'm not having any more babies."

Somehow over the course of a few days these two incidences started forming into a thought in my mind. "Is God doing something here - in my family?" So I started praying about it. No big voice from heaven spoke or thunder in the sky, but I felt a spark of excitement about the possibility.

Our family went on a getaway for Thanksgiving and Bruce and I had a dinner out by ourselves. Over dinner I shared with Bruce all that had been going on in my heart and mind. I thought he would laugh it off or say it was ridiculous - we already have so much on our plate, but he didn't. Instead we discussed how we both wanted to be open to God's lead and that if this was what God had for us, we didn't want to miss out on that. His response floored me and just made the spark of excitement in me grow bigger.

I continued to pray and started looking into African adoption on the internet. I saw the faces and heard the stories of so many children in Africa who are orphaned and without hope, and my heart was drawn to them. I thought, "we could totally change the life of one of these precious children and give them a home, a future, and show them God's love." But how would we know if that was God's will for us?


Then I had a dream. I don't remember the whole dream, but the gist of it was that God was saying yes He did want us to adopt and the answer was in two scriptures in Romans. I woke up thinking, "Did I dream that just because it's been on my mind a lot lately? I should really go read Romans and see what's there." But my day got busy and I didn't do it. Later that day I was blog surfing and ran across a family's blog who had adopted. As I scrolled down I noticed this poster with the little girl who looks a lot like Aubrey. Then I read the scripture reference and my heart started racing. There was my answer in Romans! 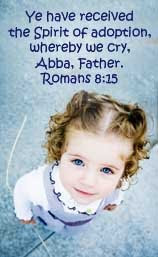 I shared my discovery with Bruce and we started getting serious about the reality of this in our lives. At this point I hadn't really shared all of this with anyone else, but when Bruce brought it up with his kids over Christmas, I knew it was becoming pretty real. We still were using words like "we're thinking about this", etc.

I have a dear friend who is in the process of adopting a child from Ethiopia and I had been dying to talk to her about all of this. We met for coffee and I spilled my whole story out to her. At one point in our discussion she just stopped and said in a tone I'll never forget, "You're Adopting." It was the first time anyone had spoken the words in that affirmative, non-questioning way. Immediately it rang true in my heart and I excitedly said, "Yes, we are!" It was then that I knew for sure.

So we begin our journey toward adoption. There have been many other heart-warming moments along the way - like when Bruce was looking over the costs associated with adoption and read the line item of a one-way ticket from Ethiopia to home for our new child. The thought of that made his heart fill with joy!

We can't wait to share more of our journey and are looking forward to the many things we know God will bring about through it.

2:05 PM
Posted by The Tulloss Family

I Just Love This Girl 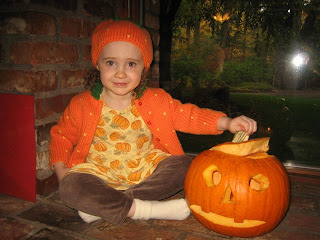 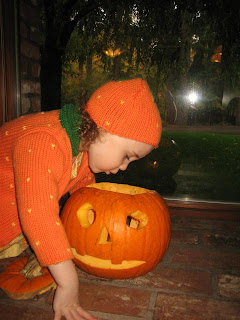 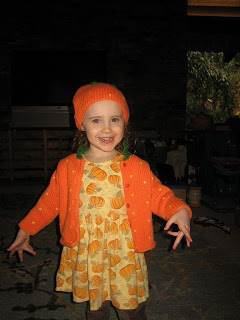 The Many Faces of Aubrey 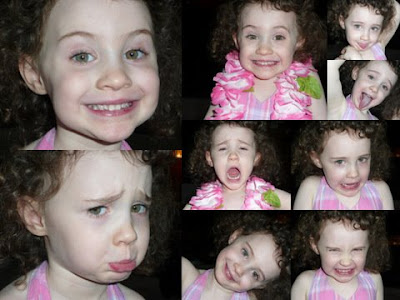 The other day Aubrey wanted me to take her picture. These are all the faces she made - happy, sad, excited frustrated, angry, silly, etc. I think she's delightfully expressive. What fun!